February 26, 2019
This week's Top Ten Tuesday is about places in books I'd like to visit. I struggled coming up with ten, probably because I love dystopian novels but wouldn't want to visit the world despite loving the book. Also, I contemplated a few fantasy worlds (like that in Reign of Shadows) that I probably would not survive a vist to. Still, I was able to come up with a list of five-ish, all of which are fantasy worlds that I think would be really cool places to be able to visit.

The Percy Jackson and the Olympian series was the first "big kid" series that I fell in love with and I still love the first five books today. It would be amazing to get a chance to visit Camp Half Blood. Like, I know the basics of how it works, but it would be so cool to be able to experience everything firsthand. All of the cabins look different and it would be so cool to see that little hodgepodge collection of unique cabins. I love so many of the characters too and it would be amazing to get a change to meet so many of them.

Ozma of Oz is my favorite Oz book and the Nome King's Kingdom is so awesomely described. I probably would freak out to actually be able to see all of this stuff. I left Oz in general though because the Oz of the books is absolutely amazing. I wouldn't be able to hit all of the spots highlighted in the books (and probably wouldn't want to) but still I would love to hit the highlights. My uncle collected the books when he was little and gave them to my sister who read the first one to me because I was terrified by the movie when I was three and didn't want to read the series. Still, I am glad I did because I have found memories of many of these books.

If everything from Pottermore is not included and nothing that JK Rowling said is true, then it would be absolutely amazing to visit here, to see what this magic school is really all about. If anything else is canon then no thank you though. I think my entire trip would be ruined then by thinking about how wizards just pooped all over the castle and magicked it away. Where does it go? Basically, all the extra canon stuff is very disturbing and I want no part of any of it. I love the Hogwarts that is described in the books, but honestly, it would be terrifying to actually attend there. A visit would be awesome though. I couldn't just exclude this one. 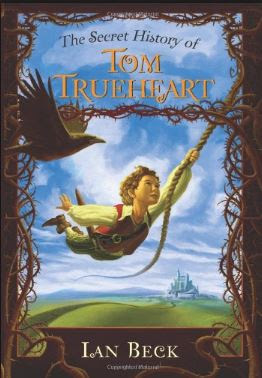 Seriously though, I would definitely be happy going to any safe fairy tale land. I ended up choosing the Land of Stories from Tom Trueheart books as my one major example though because these books were so cool to me. I think technically this might be my first fanfiction because book three of the trilogy was never published in the US and book two ends on a major spoiler. I still haven't been able to read book three (not like I'm salty about that still or anything). This world is really neat and also unique for a land of stories in that Tom is from the world and also just an average guy. He exists within the world and doesn't find this whole new place, though his adventures are definitely excited. I loved the first two books of this trilogy and the shapeshifting.

The Wishing Spell land is very much more traditional and I probably wouldn't die in it, which is definitely preferable for traveling to a place. I have only read the first book, but I definitely need to get on the rest of this middle grade series as well.


So, these are my fictional travel destinations! Would you choose to go to the same places? Is there a series that you never finished because the last book wasn't published in your country even though the book before it ends with a cliffhanger? Be sure to let me know in the comments!


Thanks for reading!
Alyssa

Popular posts from this blog

May 04, 2019
What's better than pirates? Space pirates. And what's better than space pirates? Clearly Scallywag A Thon, a pirate themed readathon that is based on space pirates this year. I just found out about it last week, but Scallywag A Thon starts tomorrow and runs May 5-12. There are multiple paths to take along the map to find where X marks the treasure. In order to make it to the X, there are at least four challenges to complete. You can check out the map here if you are interested in joining me in this quest! This was my first readathon making a bullet journal spread for. I'm actually considering making a post about my starting to bullet journal, but I thought it was fun to create a spread for this readathon, despite my lackluster artistic abilities. Fair warning, I do have problems sticking to a TBR, so this is likely to not end up being what I actually read during the readathon. I definitely have mood reading tendencies. For my starting point, I chose the nu
1 comment
Read more

January 04, 2019
Happy New Year!🎈Welcome to 2019!🎈 Last year I started this blog and as I'm sure you could tell if you started reading then, I had absolutely no idea what I was doing. Then I went off to college and had no idea how to adapt from high school life, which definitely did not help things. But hopefully this year, I am ready to go and I will be way more consistent than last year. This leads me to my New Years resolutions and goals. Some of them are for this blog, some for writing, and some are closer to my personal life. However, I thought that I'd share them anyway, in hopes that this will help in my motivation to actually get them done. I don't know if it was just my school, but I had to learn how to make SMART goals too many times to count. In case you have never heard of SMART goals before, this stands for goals that are specific, measurable, achievable, relevant and time bound. However, I am awful at following instructions, so while I used some of these ideas whi
Post a Comment
Read more

June 18, 2019
Welcome back to another week of Top Ten Tuesday! Top Ten Tuesday is hosted by  That Artsy Reader Girl with prompts every week! This one was surprisingly hard for me, maybe because I'm not really in the middle of any great series right now and all of the authors I read a lot aren't releasing this fall. I did include multiple books that I already got from Netgalley but they have not yet come out and I am behind but I still want to read them because I'm excited about their potential and hope that they are as amazing as I wish. So let's get started! Of Ice and Shadows by Audrey Coulthurst- Mare and Denna are an amazing sapp hic couple. I loved Of Ice and Shadows, and I absolutely cannot wait to read the sequel, but I have to. I am really excited for this book. Girls of Storm and Shadow by Natasha Ngan- I got my sister the first book for Christmas and still haven't read it, but this is another amazing sapphic series that I need to read. My sister loved
26 comments
Read more